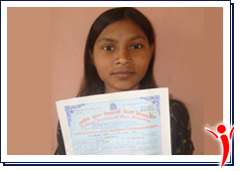 Suman is currently studying in class-VI at Teosa Middle School. Her father Dhilip Chauhan is a daily wage earner with monthly income of around Rs 2000.She has 2 brothers and 1 sister. She had not undergone any schooling previously.Azad India Foundation had started project â€“An integrated Approach to Women empowerment where a non formal centre was established in the village Teosa.Suman joined the non-formal centre for Class -III .She cleared the NIOS Level A after sheer hard work as she was helping her parents and looking after her siblings. She gave merit test at Middle school.Suman is a very hard working girl.Inspite of poor family background she is continuing with her education. She is determined to complete at least class-X .She motivates other girls in her village to study. 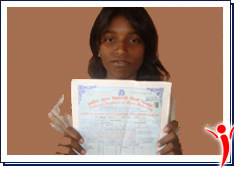 Manju is currently studying in class-IV at Teosa Middle School. Her father Munna Chauhan is a daily wage earner with monthly income of around Rs 2000.She has 2 brothers and 1 sister. She was not going to any school previously.Azad India Foundation had started project â€“An integrated Approach to Women empowerment where a non formal centre was established in the village Teosa.Manju joined the non-formal centre along with her sister Bulbuli.She cleared Level A of NIOS and currently studying in class IV in a regular govt school.She is very hard-working and fond of reading. She loves going to school every day. 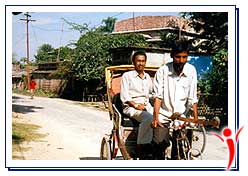 Md. Nazir, age-30 used to ply cycle rickshaw on rent where the owner of the rickshaw used to take half of his earnings. The life was very difficult with three small children and a wife to support. He approached Azad India Foundation for interest free loan to buy rickshaw of his own. After getting information about his background AIF extended him loan of Rs 3000.

"I bought second hand rickshaw with the money given by Azad India Foundation. They did not charge any interest .I have repaid the loan. Now I earn Rs.60-70 per day sometimes even more. Life has become little easy now. I have put my daughter in the Government school as now I realize that education is very important in today's world. I am determined to educate all my three children." 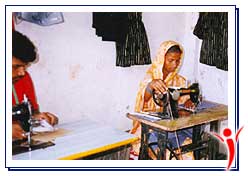 "I have taken sewing machine on loan from Azad India Foundation. I learnt tailoring and stitching from my brothers. I used to do small jobs like button stitching etc for them earlier for which I used to get Rs5-10.My husband was the sole earner with five mouths to feed. We had a very difficult life. Now with machine I take work from the shopkeepers like stitching of pillow covers etc. Now I earn between Rs 30-35 per day." 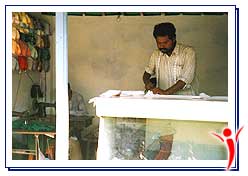 Md.Farooq, age-39 years is a tailor. He has got a small shop at Line Mohalla .He was given interest free loan of Rs.2000 for buying sewing machines and other accessories.

" I approached Azad India Foundation for a loan to buy new sewing machines. Now I get more work as I have more machines. I have been able to employ one more helper. I have now started repaying the loan." 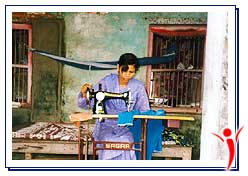 Rani age 17 years learnt cutting and tailoring at Rasulganj stitching center run by Azad India Foundation. After successful completion of the course she was given certificate. She is proficient in ladies clothes such as salwar suit, frocks and skirts etc.

" I joined Rasulganj stitching center one and half years back. Now I am proficient in ladies clothes. I am getting small works from the local shopkeepers. I want to become self-independent as I belong to very poor family. My father died when I was very young. 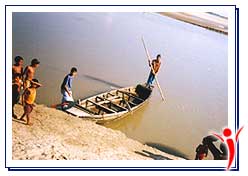 Rafique Alam is a boatman at Pabna Ghat .He was an unemployed youth with a huge family to support. After Azad India Foundation gave boat at Pabna Ghat he has found employment. He now earns Rs.100 per day ferrying people across the river.

Sushila Selp-Help Group was formed in village Faringola under Project Pahla Kadam (ADB small grant program).There are 12 members in the group who contribute Rs 30 per month.

Azad India Foundation organized training in detergent and agarbatti (incense) stick making from Khadi Gram Commission for the group members. The group members then decided to start agarbatti making on small scale. They pooled their resources and bought raw material from Kishanganj and Siliguri. 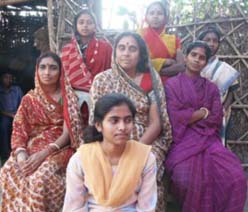 After the incense sticks were ready the main problem was of marketing. The president of the Group Sushila along with her daughter Kalyani started selling to the paan shops, house to house within the village and extended family. They earned profit of Rs 100 which gave them hope and strength for the future.

This is only a small beginning of empowerment for these women of village Faringola, Kishanganj, Bihar 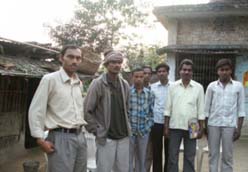 Maa Saraswati Self-Help Group is formed by men of village Faringola.When women of the village were organized under SHG and took training from Khadi Gram Commission under Azad India Foundation, men of the village were also inspired and decided to open their own group. Fifteen men came together and formed a group with monthly contribution of Rs 150.

They are pooling the money to do trading and small scale business .They are also using money to help needy people. Recently they helped father of young girl in organizing marriage.

The group members are also convincing other men and women in the village to start self-help groups to better their life. Now they want to buy tractor and have raised the monthly contribution.

They have also shown interest in getting training from Khadi Gram Commission.