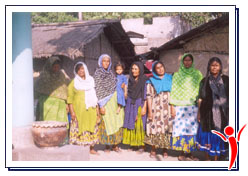 Iranis a small minority group of 800-1000 people are the branch of original Iranians who traveled to India during Mughal Period. Some of them stayed back in India forming small pockets in various states.

This splinter group entered Kishanganj around early 1980s from Purnia.Most of them have bought land and now settled here.

In the beginning these people used to lead nomadic life moving around in Khafilas or caravans and setting up Khemas or tents.They used to trade in horses selling them at fairs, festivals and to rich landlords. Later they shifted to selling knives,glass frames etc.

Now they sell semi-precious stones to the local people and also at other places. They source the stones Jaipur and Kolkatta.Even now men lead the nomadic life going from one place to another place for their business.Women usually stay behind looking after the families.

They speak Persian mixed with Hindi and Urdu. There has been many changes in the language according to the local influence. Iranis are tall and wellbuilt with prominent straight nose and fair in complexion.

Irani women still wear lehengas and Kurtas as prevalent right from the British period. This dress was a proof that these people were traders or Saudagars moving from one place to another place.There is no special clothing for the men.

They have adapted according to the local dress code.Iranis consume lot of meat in all three meals.Main dishes are Halwa Puri,Degh pulao or Halim and Dal Ghost apart from regular chicken and mutton preparations.Another old tradition still followed has been cooking 100 rotis on one tawa put upside down with long belan for family feasts and religious festivals or marriages etc.The food is cooked with lot of spices to make it delicious and mouth-watering. 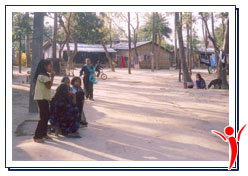 There is no dowry system.Boy usually gives Rs.5001 or Rs.10,001 to the girls as Meher at the time of the marriage.

A proposal goes from boy's family to the girl's house and after deciding among themselves ,the families approach the Sardar or the Head of the community for deciding the money.

Sardar after discussions with both the sides settles the proposal.Iranis have mukhia or sardar as the head of the community who take all the decisions and settle disputes among the people.The Sardarship is hereditary transferred from generation to generation.The boys are given preference over the girls but girls are respected in the community.

The education level is low as only 50% of the boys are educated upto matric.The girls are not educated. Only 10-15 girls in the whole community have studied upto class 6-7.The girls stay indoors and do household work and some of them have undergone religious education.However there is no purdah system and girls are allowed to go out.The community is by and large isolated and most of the members are poor.

It is difficult for most of them to make their both ends meet. Whatever they earn they spend, without bothering for the future.They have large families with on an average 7-8 members.There are no divisions within the community between rich or poor.People celebrate all the festivals and feasts together.

Iranis have amalgamated with in the local community and become part of the Kishanganj culture.They are peaceloving people trying to preserve their identity.