Major Activities of the Project Talim

Since teacher instructors and cluster-level coordinators are new, a need was felt for building their capacity in nonformal ways of education. Some of the teachers were engaged in tutoring before the assignment. A three days residential training was done by Mr Prasad and Mr Arvind Kumar in June.

The main issues dealt were :

Based on the training, Mr Prasad evaluated the performance of the teachers and rated them in A (excellent), B (good) and C (needs attention).The teachers are also given monthly orientation so as to improve their skills further. It is a continuous and ongoing process.

Azad India organized one day non residential training in SHG formation in the month of July where Mr Sanjay Mishra, DDM, NABARD was invited to give information on the process and linkages with the bank to the teachers.Mr Qaisar Alam ,master trainer on SHG formation also gave information on sustaining the groups, register maintenance and organizing meetings with the women. All the 40 NFE teachers and CLCs attended the training program.

The main health issues covered are :

Formal education through NIOS - for 6-14 years age group, ie upto class 8, would be taken up for about 3000 children in the project area over the 3 year period. These children would learn at non-formal centres set up in selected villages. Teachers would be recruited and trained by state level resource persons. Relevant educational material, books and learning aids would also be available for the children to be able to learn well.

Functional Literacy for girls above 14 years and women - will be provided at the 20 non-formal education centres. The members of the SHGs in the villages will be able to access this facility. Books will be provided to the girls and women and efforts would be made to retain their interest in education.

The literacy rate among women is very low in the Kishanganj.In the baseline survey also the literacy and educational status among girls and women is an area of concern. It has been realised that it is important to inculcate the importance of education among women especially among the mothers so that they send their children to study. The girls above 14 years of age who dropped out of school due to various factors are also a target group so that at least functional literacy should be imparted to them.Azad India developed a module on Adult literacy with the support of Mr Prasad (Education consultant) and orientation was given to the NFE teachers on its usage. They interact with the women and girls within the villages according to the time suitable to them. In Cluster - I, 324 women and girls are enrolled for functional literacy classes with 87% attendance level. In Cluster-II, 400 women and girls are enrolled with attendance level of 60%.

Madarsa Non-formal Education centres - will be set up in selected villages. The children studying in the Madarsas will be linked with NIOS. The teachers will be selected from the community and trained by AIF. Annual activities will be organized for the children of Madarsas and education centres. About 3000 children will be covered by this program. Basic hygiene awareness will also be inculcated in the centres by the teachers. The learning process will be facilitated by using different education materials.

NonFormal education through NIOS : AIF has selected Madarasas for imparting education as these have infrastructure and children are already undergoing religious education. Where Madarasas are not available, non formal centres are established. These centres provide non-formal education to children up to class VIII based on National open school format. A pre-test of the children was done at all the centres to assess their level of understanding.

An admission database of the children who joined the centres had been prepared and sent to NIOS. Since drop-out rate of the rural children in Kishanganj has always been reported very high, AIF is targeting almost double the number of children so as to minimize the drop-out tendency and sustain their interest in the education. The students are taught according to the curriculum prepared with the suggestion of Mr Prasad. The methodologies adopted are both formal (blackboard) and nonformal (drawing in the sand, visual means like charts) so that concepts become clear.

Women's development - would be facilitated with the formation of 60 SHG groups over the three year period. The project would provide training to about 700 women in decision making and planning. They would be encouraged to do savings which would contribute to strengthening their economic status. Orientation on panchayats, legal literacy, aspects of mother child care would be a part of the regular activities with the women.

Azad India is facilitating SHG formation in the intervention area with twin focus of providing them functional literacy and equipping them on their rights so that they can improve their economic status. In last four months 19 groups has been formed with 250 women members. They have deposited around Rs 9000 as savings.

A total of 42 meetings have been carried out in different villages for SHG formation. An attempt is being made to link the SHGs with the banks and NABARD.

Community Health - would be an important component of the proposed program. Awareness and promotion of full utilization of government health facilities that the people are entitled to would be taken up in the project area. The education centre would be used to facilitate health related activities in the community, particularly related to mother and child care and better nutrition practices to minimize anemia and malnutrition among women and infants. Women's groups will focus on TB which is also widely prevalent in the area. They will learn causes, prevention and help communicate this to their peers and communities.

Community health is an important component of Project Talim.Azad India has organized 11 meetings in different villages on community health issues in last two months.The issues covered so far include :

A module on community health issues has been developed with the support of Mr Prasad (Education consultant) which will be given to the NFE teachers so that information can be imparted in systematic manner.

Project Management - The project team of 44 which includes 40 NFE teachers, 3 Cluster level coordinators and 1 Project Coordinator is from the community itself. Two teachers are assigned per nonformal centre. The villages are divided into two clusters under one CLC each. One CLC has been hired for SHG formation and their linkages with the banks. Their work is being supervised by Project Coordinator.The CLCs collect monthly reports from the NFE teachers and consolidates the data and presents it to Project Coordinator. All the important meetings are done in the presence of CLCs and PC.Monthly meetings and orientations are also organized to discuss the progress of the project and the tackle the difficulties in the intervention area.

Two MIS formats have been developed for tracking the progress of children (6-14) and women and girls (above 14 years).They includes the progress in each subject, attendance level, and functional literacy and maths for women. Daily diary has been given to each NFE teacher and cluster coordinators to record their daily activities and work done at the NFE centres in the morning and among women in the afternoon. 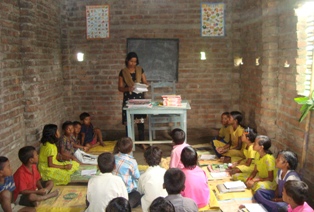 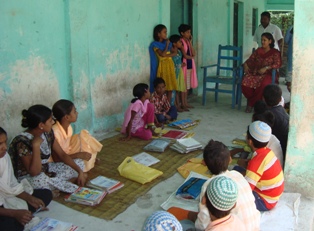 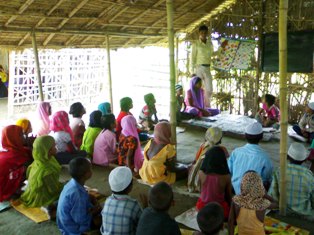 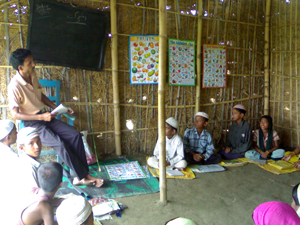 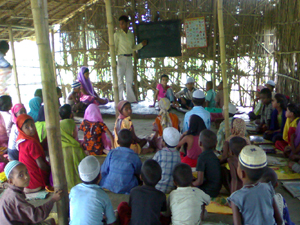