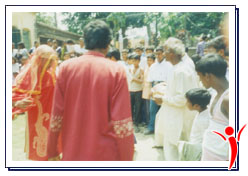 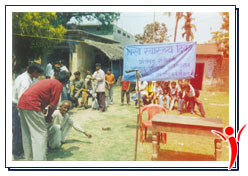 The H/A and PEs of AIF, staff of the hospital and members of local community were present in large numbers. The natak mandli performed plays on girls' health and AIDS awareness on the occasion.

10-13th August
Azad India Foundation organized series of community meetings at villages Damalbari, Powakali, Pothia, Thakurganj and Chattergach regarding rural schools. A large number of local people including panchayat members, village elders and other important members attended the meetings and gave their suggestions. It was decided that Azad India foundation would begin formal as well as nonformal education for the children with the help of the village committees. The local educated youth would be employed as teachers. 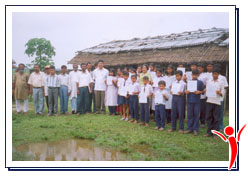 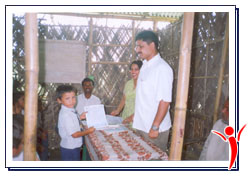 Azad India Foundation organized a function at the premises of Azad Public School to distribute certificates to successful children and students who completed various courses run by the Foundation.Mr.S.K Poddar, Shrimati Suniti Chakravarti and Mr.Sanjay Upadyay SDLR Kishanganj were the special guests who graced the occasion. About 15 girls of Rasulganj nonformal education centre received certificates in stitching and tailoring from Mrs.Suniti Chakrabarti. 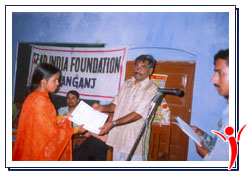 8th September
On the occasion of International Literacy Day Azad India Foundation organized a function at villages Baragariya and Puranderpur (Block Pothia) to give away National Open School Level-A Certificates to successful children and girls belonging to various villages. It was attended by large number of people including the panchayat members. It was followed by performances on the health issues by AIF's nukkad natak mandli.

23rd December
Ms Tinku Khanna,Ms Janki and Mr Kalam from Aapne Aap Women International an NGO working in Calcutta and Forbesganj visited OBE centres at Kharna and Bharagariya.The children welcomed them with a song and displayed their learning skills. They were impressed with the progress of the children especially the girls. 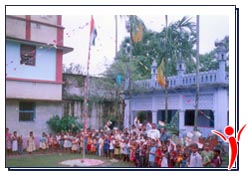 26th January
Sports Day was celebrated at Nonformal centre of Peer Pokhar and Kharna where 60 children participated from the two villages. They presented a small cultural programme.The winners were given prizes by Mrs Yuman Hussain and Mr Alvise Fabretto. 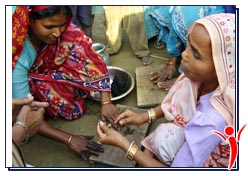 28th Jan- 2nd February
Azad India Foundation organized training under Project Sanjivini for its 15 health animators and peer educators working in villages of Thakurganj and Pothia.Mr Ziauddin from Prerana Delhi was the resource person who provided the training in most innovative ways to the staff.

A puppet show on consequences of early marriage was performed by Mr Shahid and Mr Akil at the premises of Azad Public School.It was well -attended by the people.

20th March
Azad India Foundation organized one day refresher training in teaching methods for the 22 teachers of its 7 OBE (NOS) centres.The training was conducted by Mr Shamim Anwar who is a TLC trainer.He explained many innovative techniques for teaching young children.

30th March
Azad India Foundation organized poster and drawing exhibition at the premises of Azad Public School where colorful drawings made by rural girls were put up for the general public. The drawings depicted the role and status of girl child in the villages. Some of the drawings were on health issues.

AIF organized five days residential training programme at the premises of Azad Public School in the month of January (28-1st Feb).It was conducted by Mr.Ziauddin a resource person invited from Prerana New-Delhi. The total number of participants were 19 including the programme staff and HA/HM.

The training was participatory in approach with interaction between trainer and the participants. The trainer divided the participants in three -four groups and the exercises were all group activities. The discussions were held between various groups.

Simple games were devised for those participants who were shy and unresponsive. The other techniques followed were mind mapping, question and answer sessions, short lectures and information which participants wrote down. The main issues covered were :

The training was participatory in nature with more emphasis on group activities. It helped those HM/HAs who were new in clarifying their concepts. The group exercises, the simple language and games helped the participants in gaining confidence.

Training of the Local Natak Mandli on ARSH issues

Azad India Foundation organized two -days(14- 15th October) training for local natak mandli at Azad Public School.Mr Rajesh Kumar and Mr Manoj Kumar from Kaifi Azami IPTA group Patna gave the training to 5 members of the troupe. One the first day they prepared a play titled 'Sahi Khabar' in which the story line addressed the following issues of early marriage, early pregnancy and its consequences, relationship between husband and wife and disparities between boy and girl.

On the second day the participants prepared the play titled 'Jeevan ka Sawal'which dealt with the issues of STI /RTIs and AIDS and their prevention. The main emphasis was on maintaining personal hygiene both for the boys and girls. They prepared songs in Surjapuri language and later the plays were performed at Rasulganj NFE centre and Caltex Chowk Kishanganj.

The local natak mandli was again send to Mahila Vikas Samiti Nawada for 10 days training (25 Jan-5Feb). The training was conducted by resource persons from NECTOR in which five member team participated. The main aim focus was on the techniques of the communication strategy with a thrust on Nukkad Nataks, Forum Theaters and Puppetry. The team was exposed to the techniques of script writing and message building.

Azad India Foundation organized one day refresher training (20 March) in teaching methods for the 22 teachers of its 7 OBE (NOS) centres.The training was conducted by Mr Shamim Anwar who is a TLC trainer. He explained many innovative techniques for teaching young children.